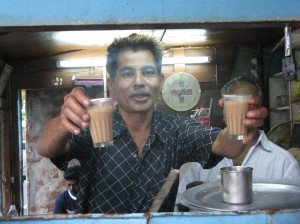 I giggled the first time I saw it on the menu at the coffee shop: chai tea. “Why does it say chai tea? Chai is tea,” I said to my mom, Catherine. “Why do they want me to order a tea-tea?”

Growing up with East Indian parents, I knew chai was the Hindi word for tea. Like most children, I had no concept of ethnocentricity, and assumed everyone called it chai.

My parents flirted over a cup of chai on their first date 28 years ago in India. After immigrating to Canada in the ’80s, they finally settled in Mississauga, Ontario and have been drinking chai together ever since.

“People drink chai three to four times a day in Bombay, no matter how hot it is,” Catherine says. “It’s refreshing, it’s a social drink, instead of alcohol. Women mostly drink more tea than alcohol in India. It’s more entertaining for people too, it’s like a courtesy to offer tea and some snacks. It always goes hand in hand.”

‘Tea at three’is a British tradition that was instilled in my mom while growing up in southern India, and she passed it on while raising me in southern Ontario. “I was watching how my mother made tea for people and that’s how I learned it,” Catherine says.

Busy as we are, having chai is more than just a beverage. Chai is equated with bonding and quality time, meaning we spend 15 minutes together either discussing the day or just sitting in comfortable silence. For over 19 years now, my 56-year-old mom comes home from her 7 to 3 shift and immediately makes a cup of chai. She was not always an expert, though.

“The first time I tried to make it, it was too strong, and I wasn’t able to drink it. It tasted very bitter, like poison, and I don’t know how poison tastes but I couldn’t drink it,” Catherine says.

“Now I’ve become an expert, after 25 years of drinking it. Even if I have to make it for 12 people, or 20 people, I know exactly how much to put, in terms of sugar, tea leaves and milk. It comes with practice,” she says.

Parul Amin, 39, is a retail associate in Burlington, Ontario. She is a family friend who also considers herself a chai guru. “Mummy, of course, introduced me to chai when I was around 25 years old,” she says. Her recipe is slightly different from my mom’s, as she hails from Gujarat, along the northwestern coast of India. Like all Indian recipes, chai varies from region to region. Depending on geographic location, certain spices are used more than others.

I did not realize the significance of chai in my daily routine until I moved away to university eight years ago. Drinking it –and making it– wasn’t the same without my mom. Now that I’ve mastered her method, I’m thrilled to share the family recipe. “Homemade tea is better than store-bought tea, and it’s just so easy to make it,” Catherine says.

Once you make it a few times, you will find your own special blend. Feel free to add or subtract spices to suit your definition of what a great cup of chai entails.

Mom says you should always offer tea with Indian snacks. I wouldn’t want to get you in trouble, so here are a few recommended munchies, available at any Indian grocery store (or even try the international food aisle at the supermarket):

For thousands of years, Indians have used tea for its healing properties. Adding fresh spices such as cinnamon, cloves and ginger, also known as masala, gives chai a distinctive taste that is both healthy and delicious. In Canada, Starbucks, Timothy’s World Coffee and The Second Cup serve chai and chai lattes for around $4 per medium cup.

“A lot of people like the chai more than the green tea,” says Teresa Stevenson, a Second Cup sales associate at Erin Mills Town Centre in Mississauga. “It’s not too sweet, but it has that kick to it. I find that our chai latte –I’ve tried a chai latte at Starbucks and found it too spicy – ours is smoother going down,” says Stevenson.

“Even in the warm weather, people still like their coffee-oriented beverage,” Stevenson continues. “I’m a real chai tea drinker, and there’s certain ones that have a stronger blend.”

Their versions, artificial sweetness aside, fulfill the craving, but nothing compares to mom’s custom blend.