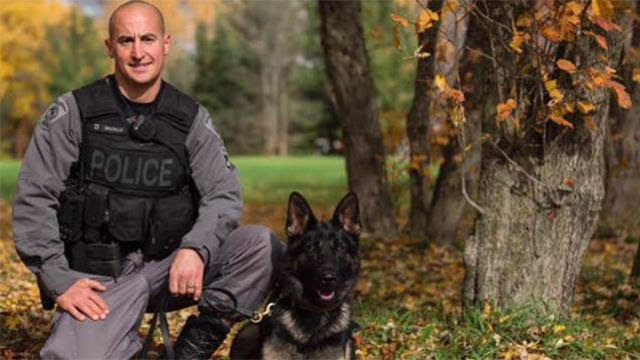 He doesn’t want you to know his name but Halton police Const. Dan Grozelle is someone you may already recognize.

The 34-year-old Burlington native is part of an elite group of officers who make up the K9 unit — possibly the best in the province, depending on who you ask.

Grozelle, ever so modest, is reluctant to shed light on his accomplishments. Ask about his four-legged partner, though, and he opens right up.

“I don’t want to brag about his operational successes but he’s had a few,” said Grozelle.

“The dog does most of the work.”

But he’s not just any general patrol dog.

Bravo, a two-year-old male German Shepherd, was named in honour of six Canadian soldiers who were killed in a roadside bombing in Afghanistan.

The bombing took place on Easter Sunday, he recalls.

Grozelle was serving in the Canadian Armed Forces at the time.

“I had the opportunity to work with these soldiers domestically and operationally in Afghanistan,” said Grozelle.

Soldiers joined American and British troops to topple the Taliban regime, eliminate terrorist operations and establish the basis for lasting peace, according to Veterans Affairs Canada.

There were 158 Canadian soldiers killed in the Afghanistan mission, with IEDs causing the most casualties.

Grozelle began with Halton police in 2009, joining the canine unit in fall 2016.

And so when it came time to name his furry policing partner, command was quick to approve the naming of the newest dog “in remembrance of this tragic loss,” Grozelle said.

While Bravo technically belongs to the police service, “they were really supportive of it,” he said.

Speaking of support, Grozelle has an annual ritual for Nov. 11 — one he shares with a group of friends.

“Some are close friends, some I see just on Remembrance Day,” he said.

“We’ll go to a cenotaph, go to a service, and then have lunch.”

A poppy is pinned to Grozelle’s grey uniform.

He says he’s thinking about getting one for Bravo, whose collar reads POLICE.

Grozelle’s superiors call him a solid addition to the police dog services unit.

“His policing and military experience is evident in how he works as part of a team,” said Insp. Glenn Mannella.

“He brings a perfect balance of enthusiasm and maturity that is apparent in his desire to learn and to be a successful dog handler.”

Peak physical fitness is a must in his role.

Grozelle runs a couple of kilometres per shift, and they’re constantly training.

You’re expected to maintain a certain level of fitness, he explained.

So he’s a master of self-discipline, right?

But he is goal-oriented.

It took Grozelle two tries to make it into the canine unit.

Now that he’s there, he admits the process was “rigorous and demanding” … an extended job-specific obstacle course of sorts, with sandbag carries and wall jumps and the like.

All this talk of physical activity is enough to work up an appetite, which brings us to food.

Surely, he burns enough calories to indulge in a cheat meal every now and then?

Certainly, and all-you-can-eat sushi is his feast of choice.

“I’m not talking a few rolls and sashimi,” said Grozelle.

“I’m filling the table and being asked to leave.”

He pauses, then smiles.

Grozelle gets him out of the cruiser and says he’ll run a few obedience drills before letting Bravo play.

“He’s so excited” to start a shift, said Grozelle.

“He’s yipping in the car the first few kilometres that I’m driving.”

Bravo is trained in tracking suspects or missing people. He’s cross-trained in the detection of guns and ammunition.

“It’s kind of my job to put the dog in the right area but after that, it’s his show,” Grozelle said.

That’s regardless of the weather, from the most sweltering summer day to an unforgivingly frigid winter night.

Grozelle knows how to recognize his partner’s needs, year-round.

“The dog’s not going to tell me it’s too hot or that he needs to quit,” said Grozelle, adding he carries first aid for himself and Bravo.

Grozelle says he’s constantly learning on the job, and teaming up with an animal comes with one big bonus.

“You’re not really getting judged by your singing on the radio.”