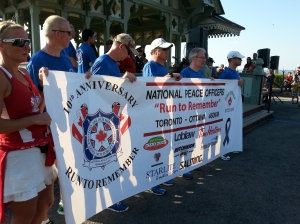 Tears and sweat were flowing on Parliament Hill Saturday marking the end of a three-day run and ride to honour fallen police officers.

The 10th anniversary of the three-day, 460 km relay kicked off in Toronto, with runners and cyclists heading to the Canadian Peace and Police Officers Memorial on Parliament Hill.

The National Peace Officers’ Memorial Run was established in 2005 by the Peel Regional Police running team, the Pacers.

Most of the original crew “including myself,” have participated annually, said PRP Staff Supt. Randy Patrick.

Running or cycling is a way of fulfilling the pledge to remember those who have made the ultimate sacrifice to serve others.

“This was absolutely an inspiring run for me, and I will never forget it,” said Naqvi, adding his grandfather was a police officer.

“I was very young when he passed away. I never got to thank him, ever,” he said.