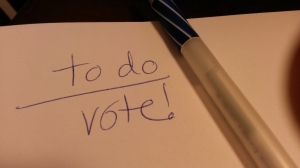 More than 10,000 households contacted the city’s social housing registry in 2013 regarding its waitlist. Only the Liberals addressed affordable housing in the form of renewing a partnership with the federal government.

Time to punish those shady Liberals for the gas plants, eHealth, and Ornge debacles by supporting another party?

Whether you live with your parents, rent, or own multiple properties, be thankful for the freedom to cast a ballot. Be an active participant.

Liberals planning fiscal balance in 2017-18; $2.5 billion for corporate grants to attract investment and woo businesses; raising taxes for those who earn more than $150K.

HST will be removed from residential hydro bills, say Democrats, saving you around $120 annually.

The Greens, NDP, and Liberals, have promised the $65 million needed to clean up the Ottawa River.

The $1 billion second phase of LRT is supported by the Liberals. Kathleen Wynne said funds will flow from a $14 billion fund for transportation outside of the GTA.

Hudak rejected bankrolling our LRT then flip-flopped, saying it will be funded after the budget is balanced in 2016, though he hasn’t committed financially.

Greens are in favour. NDP’s Horwath has also refused to commit.