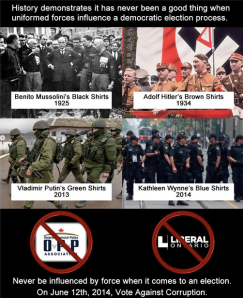 A screenshot Facebook picture, obtained by the Sun, was uploaded June 3 under an account for Robert Stocki, a former Ottawa police officer who is currently listed on the board of directors for the Ottawa West-Nepean PC Association.

Wynne’s face is not used.

“History demonstrates it has never been a good thing when uniformed forces influence a democratic election process,” reads the caption posted on Stocki’s account.

“Never be influenced by force when it comes to an election,” it continues. “On June 12th, 2014, Vote Against Corruption.”

The comparison was made the day after the Ontario Provincial Police Association, led by Jim Christie, released two controversial attack ads against PC leader Tim Hudak for his stance on arbitration, public sector pensions and wage freezes.

Stocki initially denied posting the picture, saying, “There’s nothing suggesting Kathleen Wynne has anything to do with Hitler.”

He e-mailed it to the Sun as “one of the many” images circulating on Facebook regarding the OPPA’s position, but later recanted.

“I completely stand up for what I’m saying,” said Stocki, adding his Facebook account hasn’t been hacked.

While four people ‘liked’ the post, others denounced it.

“There is partisan politics, and then there is sheer stupidity,” wrote a man who identified himself as a city cop, calling it “shameful” to lump OPP with those “responsible for the execution and deaths of millions” of people.

“No, you’re right, the OPP is not involved in executions,” was the reply under Stocki’s name.

“But they are a uniformed public body with coercive power and they used the spoils of their office, cruisers and uniforms, to make their political attack.”

Stocki spent 13 years as a sergeant and traffic cop with OPS and now works as a paralegal.

He has a website, trafficticket.tv, helping motorists beat charges.

“The comments are sickening and should be immediately repudiated and condemned by both Randall Denley and Tim Hudak,” Chiarelli said Thursday.

“This is what happens when leaders try to irresponsibly ratchet up the rhetoric, as we saw the Hudak campaign do in relation to the police unions over the last few days.”

Denley and Wynne could not immediately be reached.