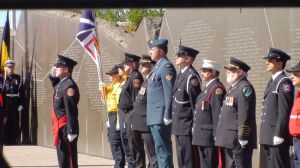 Five-year-old Braeden Kemp was wearing the helmet presented to his family to honour his late grandfather, Gordon Kemp, but likely won’t realize the significance of that moment until he’s much older.

Nine Canadian firefighters who died in the line of duty last year were recognized at the 10th annual Canadian Firefighter Memorial held at Lebreton Flats on Sunday.

Former Kanata Fire Chief Gordon Kemp, most recently Fire Chief in the Lanark Highlands, passed away in August 2011 from leukemia — a work-related illness.

“He was always there to offer a smile or a helping hand. I guess he just cared a lot about people,” said son, Michael Kemp, of Stittsville.

The helmet and medallion will be on display in his mother’s house in Kanata, he said.

“It’s just special to see that he was honoured; everything he gave and did for the community was recognized and that he’ll be remembered for generations and generations,” said Kemp. “My grandkids or great-grandkids can come down and just see that it really meant something.”

Firefighters traveled across the country to pay respect to their comrades.

“There is nothing more important to us than ensuring these individuals are remembered as Canadian heroes who paid the ultimate price to protect their citizens,” said Canadian Fallen Firefighters Foundation president Robert Kirkpatrick.

The solemn event also included a final salute, preceded by the ringing of a bell — that’s how firefighters were once summoned.

When the fire was out, it was a bell that signaled the completion of the call, said Kirkpatrick.

“If a firefighter died in the line of duty, it was the toll of the bell, three rings three times that solemnly announced a comrade’s passing.”

Fallen colleagues brought Paul Needham of Osgoode to the memorial, alongside granddaughter Alexis Currie, 4, decked out in a firefighter’s uniform.

Passion brings people to such a risky profession, said Osgoode.

He brought Currie to remember all of the fallen firefighters “who gave up their lives unselfishly,” said Needham.

He said he has been a volunteer firefighter in Osgoode for about five years and also back in South Africa.

“We’re always on call and we’re always prepared to help out those we don’t know,” Needham said.